How to Get Pregnant with the New Technology”, Dr. Silber’s bestselling book on infertility treatment and technology
Foreword to the 1998 Edition 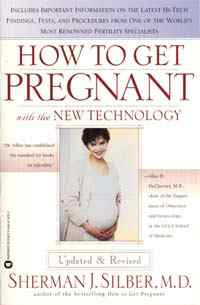 In 1991, when the first edition of How to Get Pregnant with the New Technology came out, the major stumbling block to treatment of infertile couples was the severely infertile male. In the majority of cases of severe male infertility caused by deficient sperm production, there was simply no treatment available. That has all changed dramatically in the last three years, thanks to the pioneering work onICSI performed by the joint Belgian-St. Louis team consisting of Dr. Andre Van Steirteghem, Dr. Paul Devroey, and myself, shuttling back and forth between Brussels, Belgium, and St. Luke’s Hospital in St. Louis. The work of this team has revolutionized the treatment of male infertility throughout the world and represents the single greatest advance in fertility treatment since the first IVFbaby in 1978. Now it is possible to search for a single sperm in the male partner’s ejaculate (and if there is not even a single sperm in his ejaculate, then we can usually still find sperm in his testicle), and we can use this single sperm to inject into each of the female partner’s eggs. With this delicate technique, we achieve pregnancy rates no different from those of men with normal sperm counts. There are now very few cases of severe male infertility that cannot be successfully treated.

The question that might occur to every such couple is: Will my baby be normal? The fear might arise that abnormal sperm in men with low sperm counts will cause a higher risk of producing abnormal babies. We have studied this in over a thousand such children born through the ICSI procedure as we performed it, and the news is great. The children are normal, and there is no greater incidence of chromosomal or congenital abnormalities than in the children of normally fertile couples conceiving without any kind of reproductive treatment.

In men who have had a vasectomy or who have obstruction caused by a previous infection, sperm production is completely normal, and the treatment of microsurgery is effective more than 90 percent of the time. However, if microsurgery should fail (as it does 10 percent of the time), we now have ICSI as a backup. Whenever we perform a vasectomy reversal, we freeze the sperm that are retrieved at the time of the surgery, and if the operation doesn’t work, the sperm frozen at the time of surgery are quite adequate for ICSI. This backup, in the proper hands, ensures that virtually all cases of vasectomy reversal are now completely reversible in one way or another. If the wife has good eggs, all such couples should be able to have children.

We have also made great discoveries with DNA, which the reader must understand. Poor sperm production represents at least half of the infertility cases in the world, causing couples in the past to undergo billions of dollars’ worth of ineffective, unscientific, and frankly stupid surgical and hormonal treatment. Although ICSI now solves their problem, we would still like to be able to prevent it from plaguing couples in the future, and obviate the need for their children to have ICSI in order to have children.

Our research in conjunction with the human genome project and the Howard Hughes Institute at MIT thus far indicates that sperm production in men may be controlled genetically on the Y chromosome. Furthermore, we have located an area on the Y chromosome where sperm production in these men is regulated, and we have described candidate genes that control spermatogenesis. This discovery indicates that in the future we may have a genetic treatment for male infertility, i.e., replacing the missing gene so that men will be able to resume normal spermatogenesis and not have to go through the ICSI procedure.

The purpose of this updated edition is to make readers aware of the newer technology that has emerged since the first edition and that has truly solved the problem of male infertility, and to continue to arm readers with scientific information that will prevent them from undergoing needless and useless conventional therapy.

This updated edition also gives sensitive information and advice on the feasibility and legality of egg donation, and of gestational surrogate approaches, which are increasing as older women now are trying desperately to have a child. There is very little need anymore for donor sperm with the advent of ICSI, but there is still a strong need for egg donation. Egg donation is emotionally much more readily accepted by most couples than is sperm donation. We will report follow-up on the children who have resulted from egg donation, and on their parents. We’ll need to understand why it is that an older woman who has already run out of her own supply of fertile eggs has no difficulty getting pregnant with embryos derived from the eggs of a younger woman, using her own husband’s sperm.

The question “Whose baby is it?” creeps into every aspect of egg donation, gestational surrogacy, and adoption controversies. Adopted children are being torn away from their rearing parents after two years of age when suddenly one of the two biological parents steps forward and wants the child back. These legal events have terrorized infertile couples who were already struggling with $20,000 minimum expenses and who were attempting to adopt when infertility treatment had failed. Adopting eggs, i.e., egg donation, is much more secure for the infertile couple than struggling beyond struggle, traveling around the world, to try to find a baby at enormous cost that then may possibly be taken away. Even for women without a uterus, it is possible for a mother or a very close friend, or a sister, to carry their biological child and then give that child back to her. These procedures are extremely safe and reliable if she is fully aware of both the medical and legal details.

In this edition, I will explain, in terms you can fully understand, the emergence of DNA technology. Even otherwise fertile couples who are carriers of genetic diseases such as Tay-Sachs, cystic fibrosis, retinitis pigmentosa, hemophilia, and so on, can now use this new technology to be assured that they will have normal children. We can easily screen married couples for such genetic risks, and if they have a risk, pre-implantation evaluation of the embryos can save them from having a child who would otherwise be certain to die.

DNA is the actual chemical in the nucleus of all your cells that distinguishes you from all other beings on earth, and is one of the reasons you want to have your own child. As a practical tool, the new DNA technology can help prevent the tragedy of your bearing a child with genetic disease, and can also help you better know who you are. You need to understand it.

(The book can be purchased directly through