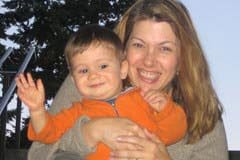 Suzanne Gastineau got pregnant with her first baby so easily, it never occurred to her that a few years later, she would be trying to conceive her second for a year-and-a-half with no results.

The St. Louis-area resident and IT specialist was 38 years old when she had her son Kyle, now 6. At age 41, she was trying to get pregnant again, but nothing happened. After going to her ob/gyn and finding that the only thing affecting her was her poor quality eggs because of her age, she was put in the care of an infertility specialist and decided to undergo a special type of in vitro fertilization that works well for older women.

After two rounds of what her doctor and others refer to as “mini-IVF” — a cheaper, toned-down form of the procedure involving fewer drugs with lower dosages yielding fewer but better quality embryos, or fertilized eggs — Gastineau got pregnant with her second child despite the fact that she had only one viable embryo. Little Alex was born last August, when his mom was 43 years old.

“I ended up with a gorgeous baby boy,” she told AOL Health. “He’s a little miracle patient. Personally, I’m a believer in IVF.”

In vitro fertilization is expensive and generally costs patients between $7,000 and $18,000 per round — including the drugs, ultrasounds, doctor’s visits and embryo retrievals and transfers. Ultimately the total bill can come to between $20,000 and $60,000 and is usually not covered by insurance.

But it is generally considered the best chance many infertile couples have of conceiving a child with their own sperm and eggs.

Women undergoing in vitro fertilization are given drugs to stop ovulation at the same time they take other medication with carefully measured doses of hormones to stimulate the ovaries to produce eggs. During the process, which lasts about two weeks, they often have to visit their doctor daily to undergo blood tests, ultrasounds and other checks.

The physician then induces ovulation and removes a cluster of eggs with a needle during a brief outpatient operation. The eggs are fertilized within three days with sperm from the patient’s partner or a donor. After that, the embryos are transferred to the uterus using a catheter. In some cases several embryos are use at a time to increase the chances of pregnancy, which can result in multiple births if more than two are transferred.

“This is an amazing technology,” said Dr. Sherman J. Silber, the director of the Infertility Center of St. Louis and the specialist who treated Gastineau. “Anybody can get pregnant with IVF except for extreme cases. … It’s a very happy thing.”

But with the often exorbitant costs, the stories of IVF failures or scams and the emotional intensity of the procedure, IVF has at times gotten a bad rap.

Though IVF doesn’t work for everyone and can be difficult and draining, those who have had success say they’re glad they did it.

Gastineau said her doctors kept drumming into her head that it was only her age that was making conception tricky, and their technique of mini-IVF was the best bet since she had very few eggs left in her old ovaries.

“They said my tubes were fine, everything else was fine — pretty much I was just old,” said Gastineau, now 44. “I was like, oh thanks.”

Silber says age is one of the biggest reasons for trouble conceiving, as women in their late 30s and early 40s have fewer eggs that tend to be of lesser quality than those who are younger.

For Gastineau, whose IVF cost much less than the usual fees for standard IVF because she was older and had so few eggs, the most challenging part of the process was the progesterone shot administered every day during her first trimester, but she’d do it all again in a heartbeat.

“Having a good mental attitude helps,” she said. “Because I got pregnant so easy the first time, I thought, it’s going to work, it’s got to work. If you’ve got it in your head that you want it that badly, just go for it.”