Dr. Sherman J. Silber, a pioneer in microsurgery and infertility, is considered a leading authority on IVF, sperm retrieval, ICSI, vasectomy reversal, tubal ligation reversal, egg and embryo freezing, testicle and ovary freezing and transplantation, and the reproductive biological clock. He performed the world’s first microsurgical vasectomy reversal, as well as the first testicle transplant, in the 70’s, and the world’s first ovary transplant in the current century. He was the first to develop the TESE and MESA techniques for retrieving testicular and epididymal sperm in azoospermic men. He headed the clinical MIT team that first mapped and sequenced the Y chromosome in infertile men and helped to discover the now famous DAZ gene for male fertility. Recently, he has perfected the preservation of fertility for cancer patients with ovarian freezing and transplantation; thereby figured out how to extend the reproductive biological clock of women. He has also developed minimal ovarian stimulation protocols to reduce IVF costs. 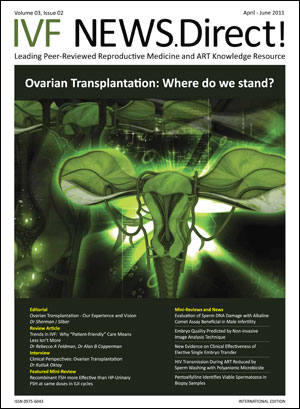 It is easier for them and for the oncologists than simple egg freezing,which we also helped to pioneer, because egg freezing would require many cycles of IVF, to give any assurance of future fertility, thereby losing precious time. Furthermore, with ovarian tissue freezing, instead of just 10 eggs or so, which, in humans, yields perhaps a 40% baby rate, the preservation of ovary tissue (using our vitrification technique) may help in saving hundreds of thousands of eggs.

Ovarian tissue freezing and then subsequent transplantation would restore not only the chance to have a baby, but would also re-establish hormonal function for the otherwise castrated woman. So, we now feel that we have a robust, no longer experimental, method for prolonging the reproductive lifespan of women, delaying menopause, and preserving the fertility of young cancer patients, who would otherwise be permanently sterilized by their curative treatment.