Bearing Dreams: How one doctor turned St. Louis into the infertility treatment capital of the world.

Dr. Sherman Silber says he knew he would be a doctor when he was 5 or 6 — because his parents told him so. Since then, it has been a meandering path to his current position as director of the Infertility Center of St. Louis, located at St. Luke’s hospital in Chesterfield, where he has practiced infertility treatment since 1976.

He graduated from the University of Michigan School of Medicine in 1966 and went on to complete his internship in California, at Stanford University, specializing in cardiac surgery in 1967. Then it was off to Alaska, where he worked for the U.S. Public Health Service, providing health care for Eskimos, Indians, and Aleuts. It was there that, despite his background in cardiology, he was first led in a direction that would eventually culminate in a world-renowned career in the field of infertility care.

Although Silber was trained as a cardiologist, what was lacking in Alaska at the time was a urologist. Silber stepped in. “I became the village urologist for two years,” he says.

He returned to Michigan and studied urology, but his path took another turn when he became involved in organ transplants. It was then he practiced his micro-surgical techniques, doing kidney transplants on rats. That work secured Silber a job at the University of Melbourne-Royal Medicine Hospital in Australia.

With his background in urology, and his vast experience in microsurgery, one day he took on a new challenge. Combining the two skill-sets, he tried something that had never been done before. “Everybody was saying vasectomy was not reversible,” he says. “I was really good at (microsurgery) and I said, ‘Let’s try this.’ When I got back to the U.S. and reported (my success in 1975), all of a sudden, I was famous.”

By this time he had moved to the University of California at San Francisco to continue his work in transplantation, but the news of the vasectomy reversal created such immediate, worldwide excitement, his department chair told him he was going to start an infertility clinic there. 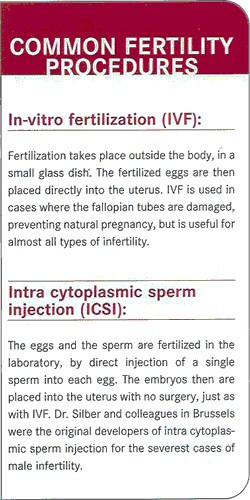 But shortly thereafter, as often happens to those who marry someone from St. Louis, he was urged to consider making his home in the midwest. “I didn’t want to leave (the University of California at San Francisco), but when I saw St. Luke’s, I was surprised,” Silber says. “They were so flexible.”

He knew he could grow at St. Luke’s, and even though he continues to operate in famous institutions all over the world, he says St. Luke’s is unique in the simple and vital policy of making patients comfortable.

He says his concerns for his patients’ comfort are well listened to. “It would just be talking to the wind at other institutions,” Silber says. “Patients come from everywhere. It’s important that they feel comfortable here.”

Silber set up shop at St. Luke’s in 1976, which at the time was “out in the middle of nowhere,” and just staying afloat financially. Soon “hundreds and hundreds of patients were flying in from all over the world (for vasectomy reversals),” and St. Luke’s “was back in the black,” Silber says. “Word got out very quickly that something amazing was happening out here,” he says. Last year alone, Silber performed 357 procedures.

Silber, author of three medical textbooks, four best-selling books for the layman (including “How to Get Pregnant with the New Technology“), and over 200 scientific papers, has a long list of firsts in the field of infertility treatment. Whether in the world, in the United States or in the St. Louis region, these first include: vasectomy reversal; tubal ligation reversal; testicle transplant; donor egg pregnancy; surrogate pregnancy; pre-implantation genetic diagnosis ;ovarian tissue freezing; egg freezing; and, most recently, the world-famous first-ever ovarian transplant.

“Every innovation the infertility field has come from our little institution in Chesterfield,” Silber says. “Who’d have ever thought this is where most of the infertility advances have been made?

Return to In the News