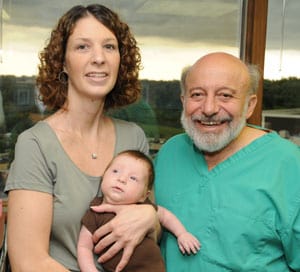 ago, and a local cancer survivor is ecstatic that he did.

When Amy Tucker was 19, she was diagnosed with advanced cancer and was told she would never have children, even if her cancer could be cured. But by working with Sherman Silber, M.D., director of the Infertility Center of St. Louis at St. Luke’s Hospital in Chesterfield, she is a grateful mother of a son born this summer [watch video].

Silber said Tucker is the first U.S. cancer survivor to give birth to a baby as a result of ovary freezing and transplantation.

St. Luke’s Hospital is known for some of the world’s most groundbreaking, leading-edge therapies for couples facing infertility issues. The hospital has been recognized in Child magazine as among the nation’s top 10 fertility centers, based on success rates.

A June 2004 Discovery Health Channel documentary [watch video] stated: “infertile couples from all over the world come to St. Louis, Mo., to chase their dream, because Dr. Sherman Silber and his team are simply the best there is.”

Silber’s patients hail from every U.S. state, Europe, South America, the Middle East, Asia, and Africa. He authored three medical textbooks and consumer books and scientific papers about human reproduction. He serves as a broadcast consultant and spokesperson about infertility issues.

In addition to St. Luke’s Hospital, SIlber works from medical facilities and clinics at M.I.T. in Cambridge, Mass., Tokyo, New York and the University of Amsterdam.

“One in every 250 young women today is a cancer survivor, but cancer treatment usually leaves these women sterile,” Silber said. “In essence, it castrates these young girls chemically and radiologically while curing the cancer.”

With ovary freezing [watch video] and transplantation, Silber said, women can preserve their ovaries and their fertility for the future.

“This medical advance brings a tremendous feeling of optimism to young women with cancer, as well as those who need to postpone childbearing for other reasons,” Silber said. “It gives women with cancer the emotional message that we are expecting them to be cured, and 90 percent are cured.”

In 1997, Tucker’s treatment for Hodgkin’s lymphoma began with chemotherapy. She went into remission, but her cancer returned. In 1998, she needed more sterilizing cancer treatment. One of her health care providers told her about Silber’s pioneering research in fertility preservation, and she decided to have him remove and freeze one of her ovaries.

Tucker has been in remission since 2001. But the treatment that saved her life also left her menopausal and otherwise unable to have children.

In January 2009, Tucker returned to Silber so he could transplant her ovarian tissue, which more than a decade earlier was frozen.

Tucker, 32, is cancer-free and lives in Columbia, Ill. Grant Patrick Tucker was born May 27. His mother reportedly is one of a couple dozen women in the world who have chosen ovary freezing to protect them from the sterilizing effects of cancer treatment.