An end to male sterility?

There are very few sterile men who cannot now father their own children, according to Dr. Sherman Silber and his partner colleagues at the Free University of Brussels. 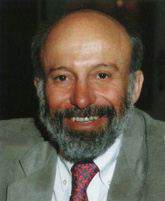