Notes from Dr. Silber’s Journal from his trip to the Galapagos Islands

Notes from Dr. Silber’s Journal from his trip to the Galapagos Islands to study extinction, and gather data for his theory on dinosaur extinction 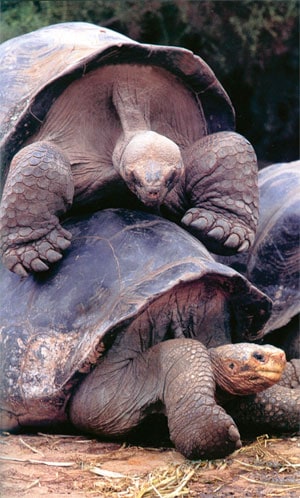 What I learned about the Galapagos tortoise breeding reintroduction program is the most important new information I got on this expedition for fleshing out our theory on the extinction of the dinosaurs.

The scientists here try to adjust the incubation temperature of the giant tortoise eggs to get nine females for every one male, in order to maximize the speed of recovery of the species population. For iguanas, they strive to get four females for every male, again by adjusting the temperature of egg incubation. They do this by adjusting the incubation temperature of the eggs. 29°C seems to be the pivotal temperature for giant land tortoises. Above 29°C you get all female. Below 29°C, you get all males. They know that creating a skew toward a preponderance of females will accelerate population recovery, and skewing toward a preponderance of males will hasten their extinction. Apparently iguanas are the same except that the pivotal temperature is about 28.5°C. Below that you get all males, above that you get all females. Obviously it is not all males or females at above or below these pivotal temperatures, but just a skewing toward male or female.

All reptiles reproduce until they die of old age. They do not run out of eggs. Same is true of birds. It is only mammals that go on living as reproductive capacity ends. The older generation can help with child rearing. That of course does not happen in reptiles or in birds and so they can just keep on reproducing for 150 years like tortoises and will not run out of eggs.

So another reason for dinosaur extinction due to TSD while the tortoises and crocodilians did fine is that the tortoises live so long and reproduce for so long (up to 200 years or more) that the global climate change would have had to have been very prolonged indeed for them to have suffered. This would not have been true for dinosaurs.

By studying at the Ecuador what scientists are doing at the Darwin breeding center with tortoises and iguanas, I have learned how to deal with questions my theory about the extinction of dinosaurs raises. It all makes sense that dinosaurs were probably TSD creatures and that massive global temperature change 65 million years ago resulted in a skewed sex ratio which led to rapid population decline.

But then why did the tortoises and the crocodilians survive? Well one possible argument is that these animals could change where they laid their eggs according to temperature change so as to adapt to global temperature change and still maintain a 50/50 sex ratio.

But another perhaps stronger argument comes out of this Darwin giant tortoise and iguana breeding center. Tortoises and iguanas have a pivotal temperature (29°C and 28.7°C, respectively) above which 90% are females and below which 90% are males. They found that the fastest and best population recovery in these animals occurred with a female skewed sex selection (9 to 1 for tortoises and 4 to 1 for iguanas). So they incubated the eggs above the pivotal temperature.

However, TSD animals can also have a system where an ideal mid-range temperature leads to one sex, and either above or below that ideal temperature leads to the other sex. It is probably related to aromatasey, estrogen, and testosterone. It could well be that the massive global temperature change 65 million years ago led to an increase in female/male ratio in tortoises and crocodilians, but a decrease in female/male ration in dinosaurs.

I can think of no other reason for the continual evolution over and over again of a genetic sex determining gene, which is completely different in all genera. I can also think of no other reason why all dinosaurs, big and tiny, except for birds, went extinct, and most other species were relatively unaffected at the K-T extinction line. Furthermore, the Hells Creek data suggest if anything, tortoises and alligators did better than some mammals. This could have been due to an increased female/male ratio 65,000,000 years ago.

One more word about gender ratio, giant tortoises, and dinosaur extinction. The role of gender ratio was critical in the “near extinction” of giant Galapagos tortoises. The huge and more difficult to catch male giant tortoises always remained up in the highland where the pirates and whalers and sailors had a hard time getting at. But the females, the smaller and easier ones to catch, had to go down to beaches on the shore to lay their eggs, where they were easier for the sailors to snatch. Thus there was a differential depletion of females causing a huge male dominant sex skewing.

This resulted in a very rapid population decline, not simply from the whalers ships, but specifically to the loss of breeding females. The skewed male dominant sex ratio in the 1500’s resulted in their decimation and near extinction. Now in the Darwin research center they are reversing this, and using TSD, they are making a female dominant sex ratio to accelerate the islands’ repopulation of these giant land tortoises. This is how the tortoises and alligators escaped extinction while the dinosaurs did not.