AMC Magazine is a magazine of the University of Amsterdam Medical Center in the Netherlands, lauding Dr. Silber’s pioneering and innovative work in infertility.

Fertility expert Sherman Silber is an innovation champion. He was, for instance, the first one to restore male sterilisation and among the first to inject a spermatozoon directly into the egg cell (ICSI). He pioneered extracting spermatozoa directly from the testes (TESE). He transplanted testicles and ovaries and was one of the scientists to help elucidate the function of the human Y chromosome. A few times per year he travels from St. Louis, America to lecture as a visiting professor at the Centre for Reproductive Medicine at the AMC. 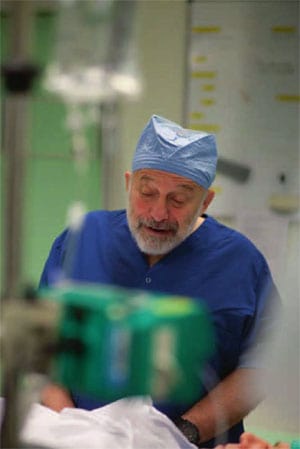 Sherman Silber – also known as the Sherminator – is a fertility pioneer. Originally a urologist – although a bit against his will. “I wanted to become a vascular surgeon”, explains the amiable American at his temporary office at the newly built Centre for Reproductive Medicine. ”The Vietnam War – talking about the sixties – is the culprit. I had to choose: either to fight in the jungle or to serve a two year replacement service in Alaska, at the National Health Service. I chose for the latter and loved every minute of it. A far off place to be sure, inspiring us to work instead of chat. “Driven by necessity I managed to develop myself to become a reasonably good surgeon, but mind, these are my own words. For most of the “cutting” specialisms we had a specialist who looked after conscientious objectors like myself. There wasn’t however anyone to do so for the urologists. So I did it myself – time and again calling Washington for advice.” Very well”, thought Silber, and when his service in Alaska came to an end, he decided to specialise in this discipline. Urology, however, turned out to be less interesting than he hoped for. Therefore Silber chose for a niche: kidney transplantations. “I was primarily interested in rejection and its prevention. The research was first done with dogs, and was later carried out with mice and rats. Meticulous work. And so I specialised in microsurgical techniques.”

The latter would be decisive for his further career. In the beginning of the seventies he thought of using the techniques for vasectomy reversal (male sterilisation where vasa deferentia are cut through). “Just for fun” he started to neatly fix them. Speaking to his wife he derogatively said: “There will not be much interest in it – why should a sterilised man want to be fertile again?” In spite of this he continued to carry out experiments with rats and in 1975 presented his findings at a congress. “What was meant to be a joke made everyone go totally berserk! I made it to the New York Times cover, to the covers of other major newspapers in the entire world, was a guest of Walter Cronkite, got interviewed by Associate Press… madness it was! And bare in mind – all of this before the internet era! My boss  put it shortly: ”Sherman, forget the transplantations and start a fertility programme.”

And so it happened. The man who is in his own words “not fond of sperm because it has odd smell” – moved with his wife and children to St. Louis where he founded a fertility clinic. He became an allround fertility specialist, both the doctor as well as a biologist focussing primarily on male infertility. Soon, however, it turned out that the methods applied were not efficient. “The amount of spermatozoa produced by a man varies enormously. There were often men with a low sperm count who underwent any kind of treatment – any old trick out of the book – and had more spermatozoa during the following measurement. Not thanks to the hormone treatment or anything similar but merely thanks to the cyclic fluctuation of sperm production; sometimes much, sometimes little. Comparable research proved indisputably : therapy has no effect, the genes determine sperm production.”

For this reason the focus moved to the genes. To put it precisely: to the genes in the male sex chromosome. Together with David Page of Massachusetts Institute of Technology (MIT) and Sjoerd Repping, still a student at that time, nowadays a professor of Human Reproductive Biology at the AMC, Silber sequenced the Y chromosome. The three are still looking for bits of genetic material which play a role in the production of spermatozoa. The idea is that this will someday shed light on male (in)fertility.

A few years ago the quest led him to Japan. Silber: “Around a quarter of Japanese men has an  Y chromosome deletion. In addition, the Japanese (and many other Asian people) have smaller testicles and often a relatively low amount of spermatozoa. Sjoerd and I hoped to find out whether these facts were correlated”. But it all took a different turn, like many other times in Silber’s life. “We discovered something unexpected and revolutionary: vitrification, a method to freeze oocytes without damaging them.” A discovery which did not go unnoticed in our own country either. So an overheated (political) debate broke out: should we give healthy young women the chance to freeze their oocytes for later? Silber knows the answer: do it! He, however, also to stresses the advantages of vitrification to young women with cancer. A large part of them survives but becomes infertile due to the aggressive treatment. If we can freeze the oocytes beforehand, we can in fact restore their fertility”. 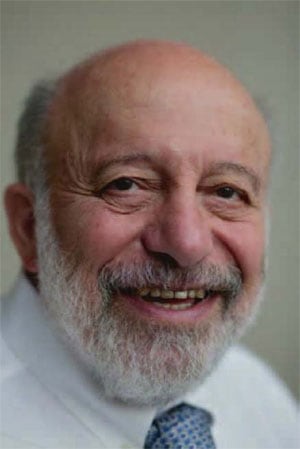 In 1977 two young men visited Silber for consultation. Monozygotic twins, one of the twins was born with normal testicles, the other without testicles and therefore condemned to life-long swallowing of hormones. The infertile brother wanted to have children but sperm donation was no option for various reasons. Silber: “They literally read everything about vasectomy reversals and were wondering whether the technique applied would be suitable for testicle transplantation.” The answer turned out to be affirmative. Again Silber made it to the front pages and again – at the beginning of this century – this drew attention of a mono zygotic twin. Sisters this time, one of which was born without oocytes and was therefore infertile. “Egg donation did not bring about a desired result and they were therefore hoping for ovarian transplantation – planting one piece of ovary of one twin in the ovary of the other. Never done before. The outside layer of the ovary of the first sister – two or three millimetres where the immature oocytes lie – was frozen and later inserted in the empty ovary of the other sister. Bingo! Three months later she menstruated, four months later she ovulated and within five months she was pregnant. Without IVF and without hormones.”

Is this the fertility treatment of the future? Silber: “In case of young women with cancer we cannot only freeze oocytes but also ovarian tissue which is inserted later. This has been successfully performed worldwide about ten times. But we do not have to, just like with the oocytes, limit ourselves to patients with cancer. Infertility is a growing problem, certainly in the western world. We do advise women to get children earlier, however with little success. Interference with their lives, find the women, and moreover offending – after all they have their reasons to postpone getting children. One can freeze oocytes and use them later for IVF. But perhaps vitrification of ovarian tissue is more effective. The frozen tissue contains after all not only one or two oocytes, but a whole lot. Removing and transplanting back ovarian tissue is relatively simple whereupon a women can get pregnant without  medical intervention”.

Will women in the future for their 25th birthday get a piece of ovary in the freezer instead of a car, a world journey or new breasts? “Not a bad idea at all”, agrees Silber. “If a women starts thinking about children when she is 38, it may not work anymore.”

“And yet, this is often reality. My ideal: every woman has a scan in her early twenties in order to get to know about her ovarian reserve. Then she gets personal advice – to freeze oocytes (or perhaps later ovarian tissue) if there is a threat she will lose her reserve soon. Should this not be the case, no action needs to be taken and she can easily wait to find the love of her life”.

And Silber’s original focus of attention? The Y chromosome? It continues to fascinate him. Not only the human variant of it. “Chimpanzees have huge testicles and produce plenty of sperm,” he says. “Logical, since their community is governed by merciless sperm competition: each male pairs as a rule with each female and the father of the offspring is usually the one with the best sperm. Gorillas, on the contrary, have small testicles, and produce little sperm. Logical, too, since they live in small groups consisting of females and one male only. All offspring is as a rule his own. The human is somewhere in-between”.

Silber and Repping hope, together with fellow-researchers, to soon come to know more about the production of spermatozoa in chimpanzees and gorillas to be able to compare it to spermatogenesis in humans. Amongst other things they are looking for an explanation for the fact that a lot of gorillas are successful in generating offspring although they seem to be almost infertile. “There’s something going on there” cuts Silber the long story short. Eventually this must lead to more knowledge about male fertility. “Who knows, this may bring us back to the Y chromosome. In the meantime we know there are huge differences between humans and chimpanzees. Now we want to know about gorillas.

This research is carried out in cooperation with Artis. Silber has been seen at the Zoo rather often recently: in the morning just before this interview he performed, together with Repping and Andreas Meissner, urologist/andrologist at the AMC, a vasectomy on two chimpanzees. A debut for the Zoo. Silber refers to it as ”a somewhat routine job”. “Zoos throughout the entire world are short of space. They cannot afford unbridled reproduction, birth control is a must. But at the same time everyone wants the endangered species – the so called high value animals – to reproduce. The solution – reversible anti conception. After all one never knows beforehand in what way the value of a certain animal will develop in the future.” So the part-time Amsterdamer is in fact back to the start. He is performing sterilisations and recovery operations. Only this time on apes.