Journal of Zoo and Wildlife Medicine, 2006

Open-ended vasectomies were performed on four male bush dogs (Speothos venaticus), with three having microscopic reversal surgery (vasovasostomy) between 10 and 20 mo post-vasectomy. The key to ease of reversal is leaving the distal (testicular) end open to allow leakage, resulting in a pressure-relieving granuloma. The proximal (abdominal) end is cauterized, providing an effective seal. This technique prevents the buildup of pressure in the epididymis, therefore limiting damage to the male’s reproductive capacity. Described here are detailed procedures for both surgeries. One of the three males that underwent vasovasostomy has successfully impregnated his female partner. This study demonstrates that these techniques can be successfully applied to animals. With the two remaining pairs, none of the four individuals were proven breeders prior to the study, so it is not possible to eliminate the possibility of previously existing infertility. This technique may have limited application for carnivores, because vasectomy does not prevent potential adverse effects to females from prolonged, cyclic exposure to endogenous progesterone. In other taxonomic groups (e.g., primates, ungulates, marsupials, and rodents) in which multimale groupings are common, this reversible male sterilization technique could provide managers with the ability to control which males reproduce without eliminating their future reproductive capacity or social interaction.

A 2-yr study of the bush dog (Speothos venaticus), a small canid from South America, examined the reproductive physiology of mature females and the effect of male presence on the incidence and timing of ovulation.1 The study focused on how the female’s cycle varied with infertile matings or ovulation without mating and pregnancies. To test the proposed hypotheses, the study included a 1-yr phase during which males and females were housed in pairs and allowed to mate. However, it was necessary that the females not conceive, so that the dynamics of repeated estrous cycles could be studied without intervening pregnancy. In order to achieve this, a short-term reversible contraceptive method for the males was needed.

The option to vasectomize the males, with the possibility of reversing the surgeries when the project was complete, would render the males infertile during the study and allow us to evaluate whether this approach might be practical for application to wildlife. Although veterinarians typically use a vasectomy procedure in domestic and exotic carnivores that involves cautery of both ends of the vas deferens and/or removal of a section of the vas deferens, this study utilized the open-ended vasectomy, a technique used in humans.9 The key to ease of reversal is leaving the distal (testicular) end open to allow leakage, resulting in a pressure-relieving granuloma.5 The proximal (abdominal) end is cauterized, providing an effective seal that prevents spontaneous recanalization and failure of the vasectomy. 4–6 This technique prevents the buildup of pressure in the epididymis, therefore preventing damage to the male’s reproductive capacity. Although this technique and the microscopic reversal of this surgery have never been tried in exotic animals, they are associated with 90% reversal success (i.e., ability to impregnate partner post–reversal surgery) in a large series of over 4,000 humans.9

If the open-ended technique is not employed, a reversal procedure may be performed. However, pressure buildup over time may cause disruption in the more delicate walled epididymis with secondary epididymal obstruction. This requires a very difficult anastomosis of the vas to the epididymis to reverse. The purpose of open-ended vasectomy, based on decades of experience in humans, would be to allow reversal to be achieved via the much simpler vasovasostomy.6–8 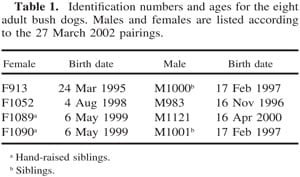 The eight adult bush dogs, four females and four males (Table 1) were housed socially prior to arrival at the Saint Louis Zoo, St. Louis, Missouri, USA (3845N, 9015W). With the exception of M983, none had been housed with an unrelated individual, nor had any reproduced. Males were paired with females on 27 March 2002 (Table 1).

Although the first phase of the study was designed to collect data on the vasectomized males and their mates for a minimum of 1 yr, health problems unrelated to the study required two pairs to be removed early. F1052 developed pyometra and required an ovariohysterectomy on 15 February 2003. This female was paired with her mate, M983, following surgery. F913 developed hepatic angiosarcoma and was euthanized on 18 July 2002. Her mate, M1000, was not paired with a new female until after his vasovasostomy.

The second phase of the study was to determine effectiveness of the vasovasostomy. Three of the four male bush dogs were paired with females. One (M983) remained in a nonbreeding situation (i.e., female spayed).

Between late December 2001 and mid-January 2002, open-ended vasectomies were performed on the four males.

Procedure: The typical midline incision used in neutering and vasectomy procedures was not used, because this technique results in difficulty freeing the proximal end of the vas deferens during the subsequent reversal procedure. With a scalpel and the aid of vasectomy clamps (V. Mueller, Deerfield, Illinois 60015, USA), the vas can be isolated from the cord via a small incision in the upper scrotum or at the external inguinal ring. In animals, thethickness of the scrotal skin precludes a scrotal approach (as done in humans), and then it is best to make a 1- to 1.5-cm incision over the external inguinal ring. Even though these first vasectomies were performed through the scrotum (as in humans), we now recommend for zoo animals that the procedure be performed through the lower groin at the external inguinal ring.

Mating with copulatory locks was observed with all four pairs of bush dogs during the first phase, when vasectomized males were housed with females. Of the three males that had vasovasostomies performed, mating with copulatory locks was observed multiple times in all three pairs, but only M1121 is known to have impregnated his mate. M983 has yet to have a vasovasostomy performed, because he is with an ovariectomized female.

Following the open-ended vasectomy, one of the testicles of M1000 regressed because of scar tissue that formed around the blood supply to the testis, as confirmed during the vasovasostomy. On 5 November 2002 he was paired with F1124. Although mating with copulatory locks has been observed several times with the pair, a pregnancy has yet to be confirmed via ultrasound or birth of pups as of July 2005, 33 mo following M1000’s vasovasostomy.

M1001 was initially placed with F1090 after his vasovasostomy but was subsequently placed with F1203. Although mating with copulatory locks has been observed several times with both F1090 and F1203, a pregnancy has yet to be confirmed via ultrasound or birth of pups as of July 2005, 22 mo following M1001’s vasovasostomy.

The preliminary results from this study demonstrate that this first attempt at open-ended vasectomy and microscopic reversal surgery in wildlife was successful in the bush dog. Although to date only one (M1121) of the three males that were reversed has successfully impregnated his mate, it is not possible to determine whether lack of pregnancies from the remaining males might be attributable to a problem with the surgery or to the individual’s fertility problem. That is, males M1000 and M1001 were not proven breeders prior to the vasectomy surgery, so the possibility of previously existing infertility cannot be eliminated. In addition, semen collections prior to the vasectomy were not definitive of the reproductive status of these males. Thus, although these males had apparently lower quality and quantity of sperm compared to the proven breeder, M983, those results may have been compromised by urine contamination. However, it is suspected that the pre-surgery reproductive ability of these two males was lower and may be associated with their failure to successfully impregnate their mates.

We recommend that surgery be performed not through the scrotum, as in humans, but rather at the external inguinal ring. This will allow easier exposure of the vas, and avoid possible damage to the delicate scrotal blood supply. Also, we do not believe that an operating microscope is necessary for the microsurgical vasovasostomy; it would be easier and far less expensive to use high-power loupe magnification for this. However, without the openended vasectomy, with subsequent epididymal obstruction, an operating microscope would be absolutely mandatory.

Although this technique provides a reversible sterilization technique for males, it will have limited application for carnivores such as the bush dog. Vasectomy will not prevent potential adverse effects to female carnivores from prolonged, cyclic exposure to endogenous steroids such as during the obligate hormonal pseudopregnancy that follows ovulation in canids and the pseudopregnancy resulting from copulation-induced ovulation in felids. High levels of endogenous hormones associated with repeated estrous cycles can cause the same problems associated with progestin contraception (i.e., uterine infection, infertility, and cancer).2,3 Although there may be limited application for carnivores, reversible vasectomy may have wide application in other taxonomic groups (i.e., primates, ungulates, marsupials, and rodents) in which multimale groupings are typical. In these situations, reversible vasectomy would provide managers with a tool with which to maintain social groupings but limit reproduction to only select males. This methodology is meant to serve as a reference for wildlife with the knowledge that species-specific modifications to the technique will be needed based on the density of the vas and the ease of externalizing it for surgery.

This study was the Ph.D. dissertation of K. DeMatteo, who was supported by an SLU Biology Teaching and Research Assistantships, the Claire-Booth Luce Fellowship, and an SLU Dissertation Fellowship. This project would not have been possible without the time, effort, and interest invested by Saint Louis Zoo staff, including the primate keepers, carnivore keepers, and veterinary technicians. The veterinary assistance of Drs. Chris Dutton and Luis Padilla was invaluable in many aspects of the study. The Zoo’s Animal Division provided financial support for animal housing and husbandry, the Veterinary Department provided financial support for surgery-related expenses, and the Research Department provided financial support for research-related expenses. We also wish to thank Leitz for providing the use of their operating microscope.