Rare Horse May Get to be a Dad, Thanks to Area Surgeon

Dr. Sherman Silber has long been a trailblazer in fertility. Now the St. Louis – area surgeon is taking his expertise in humans and using it for endangered animals.

Silber has performed the first successful reverse vasectomy on a severely endangered species. It’s also the first done on an equid – a hoofed mammal with slender legs, flat coat, and mane. The patient was a Przewalski’s horse named Minnesota living in the Smithsonian’s National Zoological Park. The 4-foot-tall horse is native to China and Mongolia.

“I’ve always dreamed of using my expertise to contribute in some way to wildlife survival,” said Silber, 66. “It was also exciting to pioneer a new procedure for which humans were the ‘test animal.’

Silber, director of the Infertility Center of St. Louis at St. Luke’s Hospital, was the first to reverse vasectomies, using microsurgery; and was the first to transplant testicles and ovaries in the human, and recover sperm from sterile men and then successfully inject them into eggs.

Five years ago, Silber teamed with St. Louis Zoo researchers to devise reversible contraceptives for endangered animals in captivity. He was successful in vasectomizing and then reversing vasectomies in South American bush dogs at the Zoo. 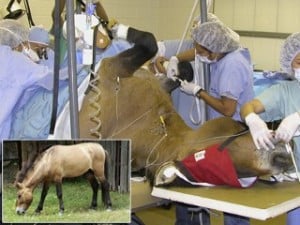 Although National Zoo veterinarians were experienced with horse anesthesia and surgery, they needed Silber’s specialized skills for Minnesota, who was “snipped” almost 10 years ago so he could be kept with females. The reversal procedure had to be done in less than an hour for the horse’s safety.

“I did it exactly the same as I would do on a human,” Silber said of the procedure, which was performed in October. Recent semen tests now have confirmed that the procedure was a success.

The next step is to find Minnesota a mate later this month.

National Zoo scientists hope a pairing will produce offspring that will infuse genetic diversity into the captive population and bolster programs to reintroduce the horses into the wild. About 1,500 are in captivity and only 300 roam freely.