Surgeons Transplant a Testicle From One Brother to His Twin 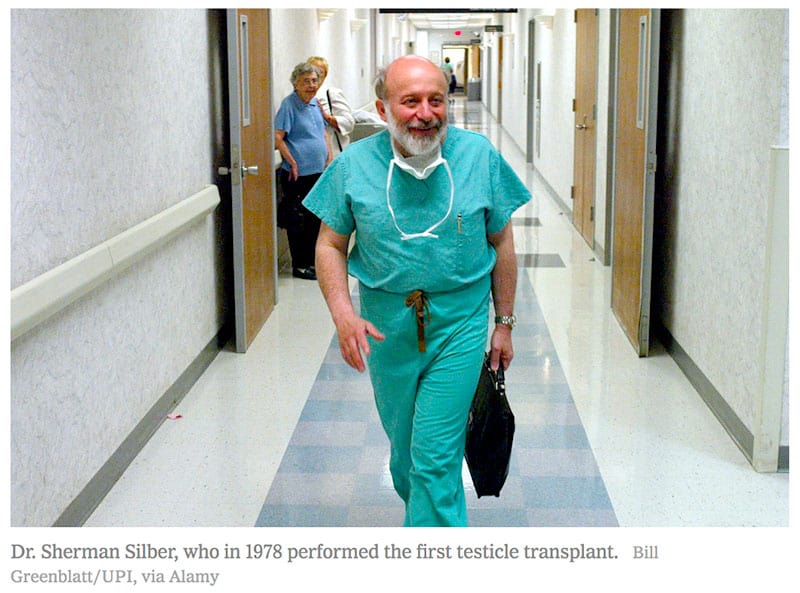 A 36-year-old man born without testicles received one transplanted from his identical twin brother in a six-hour operation performed on Tuesday in Belgrade, Serbia, by an international team of surgeons.

The operation was only the third known transplant of this type. The first two were performed 40 years ago in St. Louis, also for identical twins, each pair with a brother lacking testicles.
The absence of testicles is an exceedingly rare condition, but doctors say that the surgery may have broader applications for transgender people, accident victims, wounded soldiers and cancer patients.

The first report of a testicle transplant, by Dr. Sherman J. Silber, a fertility specialist in St. Louis, was published in a medical journal in 1978. In that case, the twin brothers were 30 when they consulted Dr. Silber.

The brother without testicles had not reached puberty until he was given testosterone at age 18, which caused a growth spurt that left him four inches taller than his brother. He needed regular testosterone injections to maintain his masculine characteristics, but the hormone levels fluctuated and sometimes caused mood swings.

He spent five years searching for a doctor who could perform a testicle transplant before he found Dr. Silber, after reading a New York Times article about his work published in 1975.

Dr. Silber said that he had performed more than 2,000 kidney transplants in rats, which required microsurgical techniques to sew together minute blood vessels the same size as those in human testicles.

“So doing a testicle transplant was not a big deal,” he recalled in an interview on Thursday. “It was like just another kidney transplant in a rat.” He said the operation took two hours.

The transplant was a success, and the recipient eventually had five children, Dr. Silber said. A year or so later, he performed the surgery again for another pair of identical twin brothers, though he did not write up their case in a journal.

Regarding the operation in Belgrade, Dr. Silber said, “I imagine these surgeons must be pretty good, because most people wouldn’t dare to try this.”